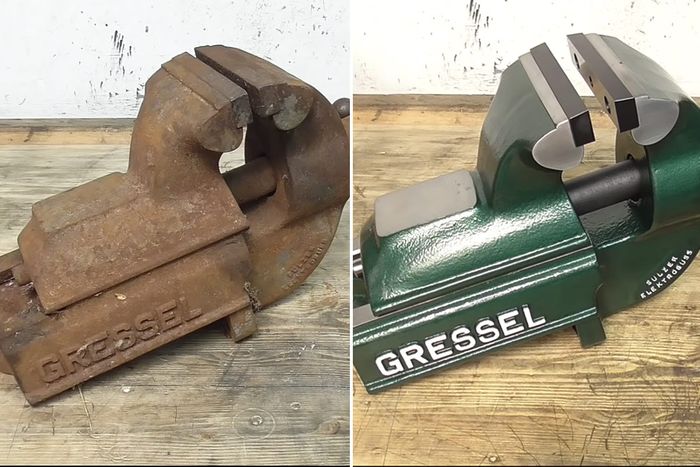 In this year of enforced asociability and a generally broken world, we all sought ways to cool off our jangling brains. Baking sourdough, demolishing Urzikistanis in Call of Duty: Modern Warfare, studying our partners like science experiments: We all sought out whatever methods of self-soothing got the job done.

Which still does not explain how, over the course of the past 15 months, I found myself both immeasurably calmed and weirdly enthused while watching a man in Switzerland make nuts and bolts from scratch.

On YouTube, there exists an entire universe of restoration videos, in which people document rescuing an old tool or other bit of mechanical equipment from the scrap heap. The rustier and further gone it looks at the start, the better. The object can be as simple as a screwdriver or as complex as, say, an electric fan. (There are also plenty of videos made by restorers of big stuff, like cars and motorcycles, but they constitute a different genre, because they unfold in series, over months.) The restorer-hosts are mostly guys. The videos usually run about 20 or 30 minutes or so, and generally adhere to a template. The rustbucket object is first shown against a clean background, with lots of crusty-dirty closeups to emphasize its cruddiness. The restorer then dismantles it, soaking oil into corroded nuts and bolts, applying a propane torch to the recalcitrant ones to loosen them, drilling out screws that are hopelessly frozen. Once it’s all apart, every part gets wire-brushed, scrubbed, sandblasted, derusted, stripped, filed, sanded smooth. (There is a lot of sanding.) Some steel parts that are rusted through get beefed up with a little welding. Painted parts get repainted. Wooden parts get refinished or, if they’re rotten, reproduced. The slots in the screws get trued up with miniature files. Polishing compound and buffing wheels come in for the third act. Finally, the whole thing goes back together, with fresh grease in the gears, and we see the moving parts turning silkily along in the final hero shot.

These transformations hit me at a primal level. I live in a Manhattan high-rise and hope never to exist any other way, but I grew up in the car culture of New Jersey, with an engineer father who lights up in puzzle-solving anticipation when the dishwasher breaks. As a teenager, I drove a $400 beater automobile and happily kept it going for several years with a brake rebuild and junkyard parts. The one thing I miss from that world is that apartment life doesn’t come with a basement workbench and a drill press. I have to fulfill my handiwork jones vicariously, and watching Iron Chef or Forged in Fire will get me only so far. In these restoration videos, the work is pared down to its essence: There’s no manufactured game-show competition overlay or pumped-up reality-show time clock. (I used to watch Project Runway, but I got tired of the edited-together fake-o interpersonal drama: I wanted to see more actual sewing.) It’s a perpetual joy to watch someone who’s very good at something do it with extreme precision.

Precision, in fact, is the distinguishing quality of the best YouTube restorers. The mediocre ones muck up their work with ahistorical paint colors or materials. Others are simply sloppy or amateurish. The more careful craftspeople tend to rise to the top, and the most popular and prolific restoration-video guys, TysyTube and LADB, are pretty technically proficient. Another, Mikhandmaker, does fine work, but most of his projects involve making new vintage-ish stuff rather than true restorations. I also like a guy named Mister Patina.

But the standard—I was going to say “gold standard,” but it’d probably be more appropriate to compare him to Type 316 surgical stainless steel—is a guy who goes by MyMechanics. He is, not all that surprisingly, Swiss. Most of his restoration projects are mechanical tools. The first project of his that I stumbled upon was a bench vise that looked like it had spent a decade at the bottom of Lake Geneva. By the time he was done, it looked like industrial jewelry, and it has 28 million views. Now he uses that vise in his shop, in what’s become sort of an inside joke: The tools he’s restored in his earlier videos show up regularly in later ones. (The YouTube commenters love this: Hey, look, there’s the arbor press again.) MyMechanics, after a bit shy of three years on YouTube, has amassed 2.35 million followers: not Kardashian numbers, perhaps, but pretty high for sandpaper and cutting oil. He’s successful enough that he’s started a second channel, MyMechanics Insights, for smaller projects that are more tutorial in nature.

He appears to be a machinist, at least by avocation and possibly professionally. He has access to very good tools: a lathe, a sandblasting cabinet, a milling machine, drill bits he keeps intimidatingly sharp. He must have obsessive tendencies, but somehow he wears them lightly, at least onscreen. (We never see him except for his hands.) Every bolt that he pulls out of a piece of machinery gets its threads precisely recut through a die. When there are casting marks on a piece of iron that were inadequately smoothed at the factory, 50 or 70 or 90 years ago, he files them off. He abhors any rough edge. If you’ve ever seen a finish called “oil-rubbed bronze” in a Pottery Barn catalogue listing of bathroom fixtures, well, he knows what that actually means: We periodically see him heat brass parts with a blowtorch (captioned “300°C,” in case you needed to know the exact temperature) and then dunk them into oil to give them a smooth brown-black coating.

Most significant of all, though, are his level of craft and his eye for the smallest detail work. If a part is too far gone, he will often give up on straightening it out, and reproduce it exactly (and I mean exactly) out of a billet of brass or steel. In the brief explanatory captions he adds to his video, he usually shows the wrecked piece, explains that it was beyond fixing, and then appends the phrase “I make a new one.” (His English is the only thing in these videos that is the least bit bent.) Those words have reached the catchphrase level; he now sells T-shirts that read I MAKE A NEW ONE. The other day, he posted a video in which he restored a century-old two-wheel scooter on which the rubber tires were pretty far gone; instead of substituting some not-quite-right modern replacement, he made a mold and cast perfect copies out of liquid rubber. (There’s a certain “he’s not going to try that?” reaction that creeps into my brain, and also into the comments threads, at these moments. It’s the closest thing to drama in these videos; it’s not actual drama, though, because you know that there will be a perfect result.)

These videos are best consumed, I find, in two situations. Either you’re at the end of a long intellectually demanding project where the external stressors—deadlines, personalities—are significant, and you want your brain to cool down. Or, alternatively, you’re on an exercise machine and need a half-hour of TV that is neither plot-intense nor highly emotionally engaging. For me, at least, an intense and engaging show like The Wire is too much when I’m attempting to run, because the image bounces slightly before my eyes. Instead, what I need is something story-free and brain-calming, and this is precisely it. Also, the sound of sandpaper on steel is excellent ASMR.

Which is not to say this idiom is itself brainless, because it tells us something about our changing world. Century-old objects like the ones these folks restore are nearly all metal, glass, and wood. All those materials can be taken apart and refinished or repaired nearly to new condition. Plastic, usually, is less so (although there are some impressive attempts). Contemporary manufacturers have, in their acceleration toward cheaper and simpler production, begun to close everything up with glue and, espeically, limit the ability to purchase parts. That means a new camera or DVD player often simply cannot be fixed. The Right to Repair movement, which has very slowly been gaining momentum in the U.S. and Europe over the past decade or so, is pushing back against this kind of manufacturing. Joe Biden recently issued an executive order backing it. But repairable goods are still not the standard at least when it comes to tech, and may never be as long as we demand (and vote for, with our dollars) throwaway products.

I do not know whether I will continue spending time in these YouTube rabbit holes now that we all can, y’know, leave the house and see other human beings. But I don’t think I’m done with MyMechanics and the rest of this well-polished universe. As we begin to foresee the end of this terrible year and a half, I appreciate his work for its ability to both distract and educate, to keep me returning to the exercise machine while showing me how I might possibly, in some theoretical basement shop of mine, produce a piece of metal that is dead-flat and mirror-polished. A lot of things in the world right now seem unfixable. Here, though, is someone who instead of giving up says: I make a new one.