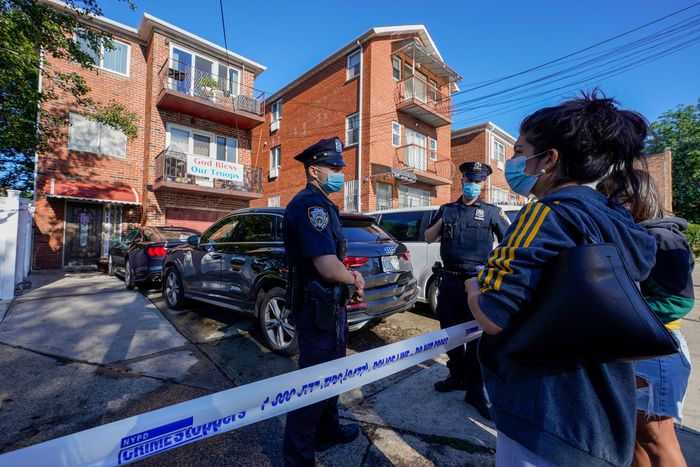 Eight of the nine people who died during the Hurricane Ida floods last night were exactly where emergency alerts told them was the safest place to be: their homes. Specifically, they were in their own basement apartments in Queens and in one case, Brooklyn. Only one of the buildings, at 61–20 Grand Central Parkway, was located in an area that was a “special flood hazard area,” according to Department of Buildings records, highlighting just how unprepared the city is for climate change. And in New York City, these subterranean spaces, many of them turned into apartments in violation of zoning and occupancy laws, are among the few affordable housing available to low-income immigrants. The Pratt Center for Community Development has estimated that there are more than 100,000 illegal basement apartments in New York, the majority of them in Queens.

It’s unclear whether the five (and possibly more) apartments where people died were legal or not. But Department of Buildings records suggest that there were questions about at least one of them. At the Elmhurst building on 84th Street where an 86-year-old woman was found unresponsive just before midnight, there had been several complaints in 2012 about a basement unit, after which inspectors failed to get into the building four times. (Per city regulations, an apartment must have ceilings at least seven feet six inches high, a window, and at least two exits, and at least half of the room must be above grade; otherwise it’s considered a cellar, and you’re not supposed to live there. A lot of illegal basement apartments might more accurately be called cellar apartments.) A 2019 Times analysis found that eight areas in Queens were consistently among the top 10 places in the city with the most complaints over illegal home conversions. The city created a pilot program in 2019 toward making these projects legal, launching it in Cypress Hills and East New York, but COVID budget cuts took it down to barely anything: For 2020, it was allocated just $91,000, and reduced its scope from 41 homes to 9.

That said, many legal basement apartments also flooded last night (which is an argument against living in any basement, although obviously many people aren’t in a position to be choosy). The water came in suddenly and violently, making escape a challenge, especially for older residents. (Basement apartments tend to be popular with seniors because they’re inexpensive and have few or no stairs.) “These units are a key part of the housing ecosystem in New York City,” said Rebekah Morris, the senior program manager at the Pratt Center for Community Development, which is a member of BASE, or Basement Apartments Safe for Everyone, a coalition of researchers and advocates. “They’re not going to go away, so we need to test and pilot and figure out a pathway to make them safe,” Morris said. Particularly as more extreme weather tests decades-old construction: At the building on 64th Street in Woodside where a 48-year-old woman, 50-year-old man, and 2-year-old child died, DOB records indicate that the integrity of the building itself may have been compromised by the surge. An upstairs neighbor told the Times that the woman who lived in the apartment called her, frantic, to say that water was pouring in from the window.

Before last night, fire was considered the primary danger in these units (and still is: yesterday a 9-year-old boy died in an illegally converted Ozone Park basement after an e-bike battery caught fire). But as flash floods become more frequent and fatal, these apartments become an issue in areas where flooding wasn’t previously a concern. Morris argues it’s becoming even more important to study ways to turn them into safe living spaces. Because as long as the city has an affordability crisis, they’ll continue to exist—and as long as the ocean is getting warmer, they’ll continue to flood.