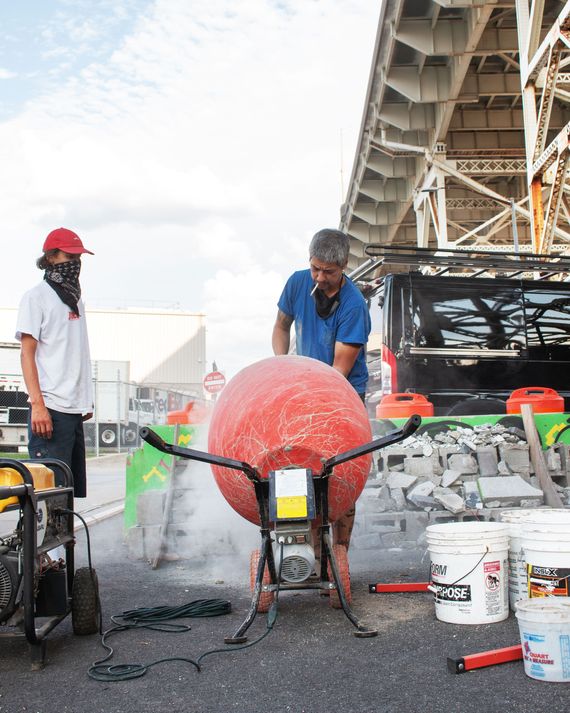 Pat Smith mixing concrete for a quarter-pipe at Mosquito Beach while Max Lockhart, a skater, looks on. Photo: Daniel Karel

On a balmy July evening, Pat Smith, a professional carpenter and the owner of CODA Skateboards, was loading up his jet-black Ram ProMaster cargo van in the driveway of a Greenpoint fabrication shop. Inside the van, he’d hoisted around eight dusty bags of concrete, a stack of dirty buckets, two crusty shovels, a generator, and a portable concrete mixer. Smith, 50, was on his way to work on a public secret in the city’s skateboarding scene: an elaborate, unsanctioned DIY skate spot hidden beneath the rusty pillars of the Long Island Expressway. Because of its proximity to a fetid stretch of Newton Creek, the spot has become known as Mosquito Beach.

In both scale and longevity, Mosquito Beach is an outlier among the city’s DIY spots, which range from daubs of concrete spread across rough obstacles to fully constructed benches and curbs planted overnight in the cityscape, a sprawling circuit of ridable spaces existing in tandem with the 37 sanctioned skate parks of New York City. Mosquito Beach is rare among them, a swampy hideout with an abundance of sloped banks and quarter-pipe ramps.

While skaters typically attempt these DIY projects in relatively unpopulated zones of the city, they are — by and large — illegal, especially when built on public property sans permit. This means skaters might pour significant time and resources into building a spot only to find their work completely demolished within a day.

“I’ve probably built at least 30 spots that were gone the next morning,” said Jerry Mraz, one of the city’s most prolific builders over the past decade and a half. “A lot of other ones only lasted a week, and some have actually lasted for years.”

So what drives them to do it? “People want to leave their mark,” said Steve Rodriguez, founder of the storied New York City skateboard company 5boro. “They want to contribute to the scene, they want to skate something exactly how they want it, they want to provide another option. It’s not just one thing.” Smith, a lifelong skateboarder and former professional, says it’s the culture’s DIY ethos. “You have a desire to skate something and you’re filling the void.”

Mosquito Beach is a DIY spot filled with ramps built by Pat Smith and a rotating cast of skaters. The spot is hidden beneath the Long Island Expressway. Photo: Daniel Karel

He and a rotating cast of other skaters have steadily built Mosquito Beach for several years, walloping the expected life span of a DIY spot. “It’s un-fuckin’ believable,” said Rodriguez, who also advises the city on sanctioned skatepark designs. “I think that one of the main [DOT] guys is sympathetic toward skateboarders, so I think he’s just delaying dealing with it, which is fucking awesome. I guess he used to skate a long time ago.”

To some, it might not seem like a stretch to compare the efforts of DIY builders to those of graffiti writers — their subcultures are historically intertwined, and they both work, largely under the cover of night, on illicit projects. But Smith argues that a DIY skate spot achieves something that a graffiti writer’s tag does not — it creates a space that keeps growing and evolving. However, there is one goal that DIY builders and graffiti writers share: Longevity. And that, explained Mraz, comes down to location and luck.

“Don’t build on private property, and if it is private property, it should be something that’s very far gone,” he said. “If it’s public property it just needs to be tucked out of the way, in a spot where concerned citizens aren’t going to give you a hard time. But to really figure that out, sometimes the only thing you can do is test it by putting something there.”

When Smith and his friends began working on Mosquito Beach — he was tipped to the location by a coworker — they seemed to have hit on the right combination of factors. It was a trash-strewn dead end, far away from any residential buildings. So they built a a midsize quarter-pipe ramp that abutted an overgrown patch of land dividing the street from the creek. When, after some time, the ramp had not been ripped out, they started adding more obstacles.

“You put in a little augmentation and you wait, then you do a little bit more and you wait,” said Smith. “And then you wait for a little more money, more energy, more ideas.”

Smith, a self-described army brat, started building ramps shortly after he started skating, at the age of 8. The impulse was borne from necessity. There was nothing exciting to ride anywhere near his home, so he and his friends built their own obstacles. He would “borrow” plywood from local construction sites and reference blueprints found in Thrasher Magazine to turn the plywood into ramps.

He moved to New York City in 1997 to work in web design, and fell in with a group of skaters that included Andy Kessler, a godfather-like figure in the city’s skate scene. Kessler — who passed away in 2009 — was responsible for what Rodriguez referred to as “the first DIY in the city,” a spot in Riverside Park on 109th street, which Kessler successfully lobbied to have anointed as an official skate park in 2005. Smith, like many skateboarders, considers Kessler an idol, and spent several years helping him build sanctioned parks throughout the city.

Meshing with the city’s skate royalty also gave Smith a bird’s-eye view of local DIY builds. Of them, one of the most memorable was on North 8th Street in Greenpoint, just off the East River. Rodriguez helped build the spot’s quarter-pipe, and even took his wife there on their first date. “It was the weirdest, most awesome public mixed-use space. There would be dads teaching their kids how to ride bikes, there’d be dudes doing drugs, there were actually some brass bands that would rehearse,” he said. As for how it came to be, he said, “There was this guy named Dean. Rumor has it that he won the lotto and paid for the DIY stuff with those winnings.” 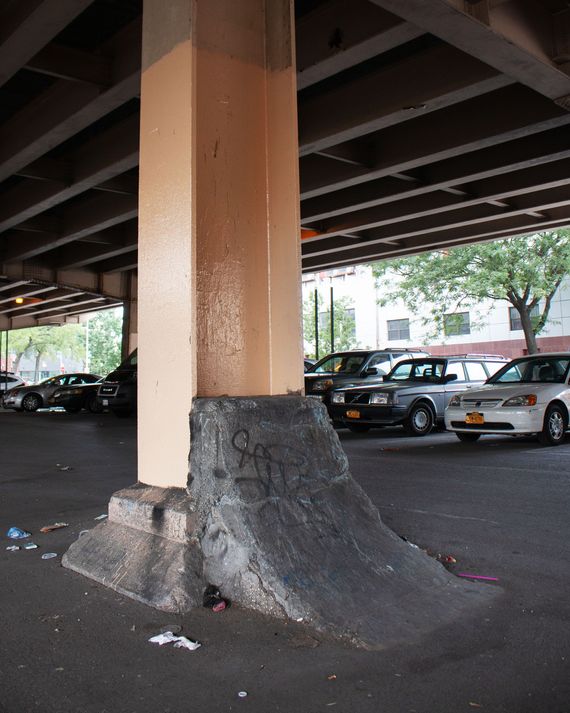 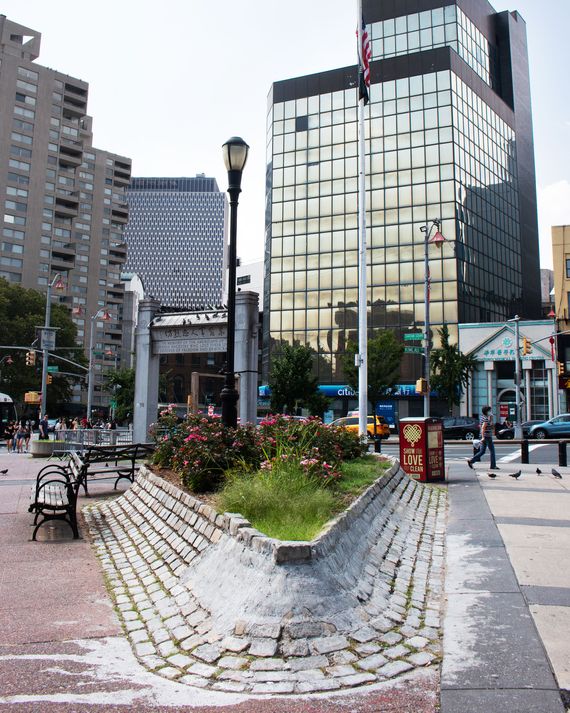 Another local DIY landmark lies under the Brooklyn-Queens Expressway. Mraz built most of its well-worn obstacles, often by himself, between 2005 and 2010, and much of it is still around. “At one point I had six, maybe seven ledges there, and a bunch of various other dinky quarter pipes,” he said. “Most of the stuff I thought was cool is long since torn out, but a couple of things remain.”

Other spots, like a pair of curbs slapped onto an embankment near the Green-Wood cemetery, a series of smoothed-over banks in Chinatown, and obstacles built near a Restaurant Depot in Brooklyn have also joined the pantheon of memorable local projects. But the scope of the DIY led by Smith under the Long Island Expressway feels of another caliber entirely.

Near the entrance to Mosquito Beach, Smith parked his van beside a pair of Jersey barriers placed by the city in May. They were installed following a deadly car accident in which a driver, with two passengers in tow, plowed through the dead end around 5 a.m. The car missed every DIY obstacle before launching into a tree and then into the creek. All three passengers later died. The tragedy seemed to foreshadow the end of the spot, but, several months later, the only changes included the new barriers and a lone streetlight. Most skaters stayed away for a while; this was Smith’s first time back since the accident.

With the help of Nick Boso and Max Lockhart, two skaters in their 20s, Smith unloaded the van, fired up the concrete mixer, and began working on a quarter-pipe that would rise up on the new barriers. They worked at a relaxed place, a benefit of the remote location. It was Lockhart’s first time building with Boso and Smith (“These are the best dudes to learn from,” he said), and he took turns with Smith drawing buckets of water from the creek nearby. While they waited for the concrete to turn the consistency of thick oatmeal, Smith wandered around, picking up trash. Compared with the surrounding street, Mosquito Beach was tidy. One of Smith’s friends had even trimmed back the hedges hanging over the obstacles.

“Cosmetic work is part of the process,” he said, a cigarette hanging from his lips. “Picking up bags full of dumped garbage filled with maggots is also part of it. It’s not always glamorous.”

When the generator ran out of gasoline, they mixed the remaining cement using shovels. Soon their hands and clothes were dusted gray. Around 8 p.m., with darkness settling over the street, they flung the last of the concrete onto the quarter pipe, still only a rough outline of the final design, and decided to call it a day.

Smith knows that what becomes of Mosquito Beach is likely out of his hands. But that doesn’t dampen his impulse to keep building these spaces. Leaning against the partially completed quarter-pipe, Smith surveyed the day’s progress with a smile.

“This shit is addictive,” he said.