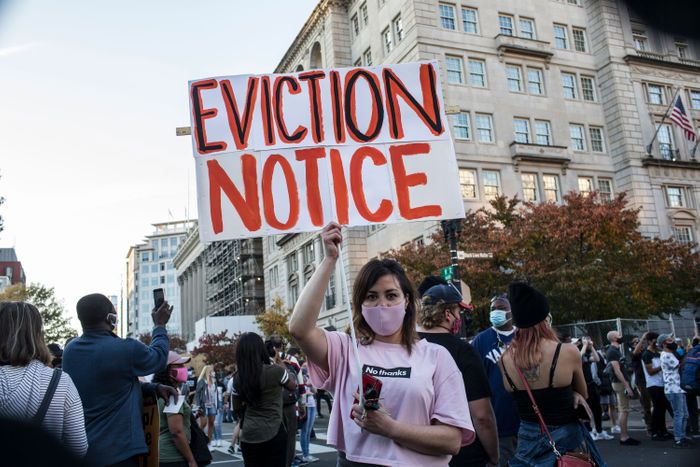 When the federal eviction moratorium lapsed on July 31, the more than 11.4 million Americans behind on rent braced for the possibility of being kicked out of their homes as the Delta variant surges across the country. Congress had closed for August recess without acting, and the White House insisted that the CDC didn’t have the legal authority to extend the moratorium. But Representative Cori Bush led a sleep-out protest on the steps of Capitol Hill that, over the course of five days, forced the eviction crisis to the top of the national agenda. And on Tuesday afternoon, President Joe Biden announced a new 60-day moratorium.

In New York, the state eviction ban is set to expire at the end of August. So for tenants with rent debt, the CDC moratorium would appear to offer more time to get rent relief before evictions move forward. But because the new federal order isn’t a blanket ban, where it applies depends on how the Delta wave plays out. Here’s what we know about the order.

The CDC’s halt on residential evictions applies to counties with “substantial and high levels of community transmission” through October 3. It’s not as sweeping as the Trump administration’s moratorium, which covered the entire country. But it does apply to 90 percent of the U.S. population, including, for the time being, all of New York City’s five boroughs. What’s different is that the rate of transmission in a community determines whether or not renters are protected. If cases are still rising significantly when New York’s eviction protections expire on August 31, the CDC’s order will shield tenants starting on September 1. But the moratorium will lift in counties after the level of community transmission declines for 14 consecutive days, and we have no way of knowing when that will be for the five boroughs.

New York launched a $2.7 billion rent-relief program in June, but in the first month only sent out aid to some 70 households out of more than 160,000 who applied. The state has since reviewed and verified 4,828 additional applications, and disbursed $20.3 million in emergency relief payments. The number of applications, which require extensive documentation submitted through a website riddled with glitches, represents only a fraction of the true need. The rollout was so abysmal that last month Governor Andrew Cuomo’s office announced a new, streamlined application, and pledged that the remaining dollars would be doled out by August 31 — yes, the same day state eviction protections expire. To put a fine point on the need to get this money out now, the Treasury Department reminded local governments on Wednesday that it “has a statutory obligation to reallocate funds from underperforming jurisdictions beginning in the fall.”

The CDC moratorium stops physical evictions — the actual removal of a tenant from where they live. But there’s nothing stopping landlords from filing new cases in housing court. More than 62,000 eviction cases have been filed in New York City since the start of the pandemic, according to data compiled by Princeton University’s Eviction Lab. But as more rent relief is distributed, fewer cases will move forward in court, as landlords who accept the money cannot try to evict a tenant for at least a year. Tenants who have pending rent-relief applications with the state are also protected from eviction.

State Senator Brian Kavanagh, the head of the Senate’s housing committee, said at a Tuesday press conference that lawmakers have discussed the possibility — but nothing formal is in place. Both the Assembly and the Senate have scheduled hearings for later this month to scrutinize how the state is disbursing the aid. In the past, New York officials have waited until the eleventh hour to extend eviction protections; the current state protections weren’t approved by the Legislature until two days after the previous moratorium expired. But Kavanagh said the current focus is on getting the rent-relief funds out to landlords on behalf of tenants. “The best solution for all concerned is to get the rent paid,” he said. That’s especially crucial since it’s possible the CDC’s latest order will be overturned by the courts.

The Moratorium Is Already Being Challenged

The Biden administration has insisted that the CDC does not have the authority to act and pointed to a recent Supreme Court ruling stopping it from issuing a new moratorium without the backing of Congress. Like clockwork, only one day after the new policy, a coalition of real-estate groups asked a federal judge to halt the new protections, citing the court’s prior ruling that found the CDC’s first eviction order unlawful. But after Congress left for August recess without passing an extension, the CDC cited the slow pace of local governments disbursing rent relief as justification for the new moratorium. “The bulk of the constitutional scholarship says that it’s not likely to pass constitutional muster,” President Biden said at a Tuesday press conference. “But there are several key scholars who think that it may and it’s worth the effort.”