Subway Flooding Is Here to Stay 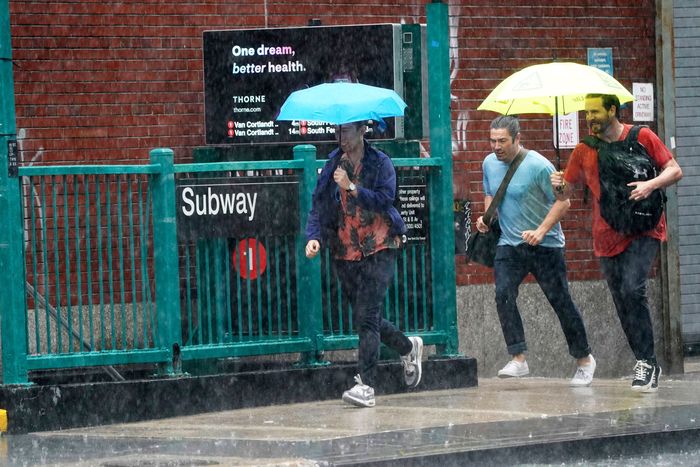 In 2012, Superstorm Sandy sent water pouring into subway stations around lower Manhattan and other parts of New York City. To prevent future flooding, the MTA began to install Kevlar “flex gates,” which drop down and seal off entryways to hold back up to 14 feet of water, at a couple dozen station entrances. But yesterday, when Tropical Storm Elsa inundated the city with as much as 3.5 inches of rain in certain areas, not a single one of the gates was used. That’s because yesterday’s storm showed another facet of how climate change will affect New York City: Not only will there be more rain overall, it will fall more heavily over shorter periods of time. And when 1.5 inches of rain drops in just an hour onto a city made largely of concrete and other impermeable surfaces, all that water is going to gather and find somewhere to go — and that’s not necessarily going to be flood zones.

Sandy was a deadly wake-up call to just how unprepared New York City is for climate change, and in many ways, the damage done by the storm has set the bar for where new resiliency projects are focused — namely, in low-lying areas along the city’s 520 miles of shoreline, which quickly go underwater when there’s a sizable storm surge. But if water that’s pushed up onto land by a major weather event is at least somewhat predictable — the lawful evil of the stormwater alignment chart — then heavy, concentrated rainfall is the chaotic evil. There’s no telling where it will show up.

Take one of the most widely shared videos from yesterday: a woman in a pink shirt wading through waist-deep water as she tried to get to the train platform. It was shot at the 1 station on 157th Street and Broadway, which sits at the bottom of a hill — but it was a clogged storm drain that made the flooding so particularly bad there. Penn Station flooded at 34th Street, as did Spring Street and a B/C station on West 96th, to name a few — all areas of the city that don’t neatly correlate with flood zones. As MTA interim president Sarah Feinberg told the New York Times, “What was different about this storm was that we got pounded by rain in places that don’t typically flood.” There was little rhyme or reason to any of it.

Preventing subway flooding from dramatic rainfall like yesterday’s requires a far more systemic approach than closing off station entrances in low-lying areas. Instead of building a city that sheets off water, pushing it away as quickly as possible into storm drains, you need one that’s like a sponge and can soak up and retain rainfall where it lands (which, again, is something only really being considered for certain waterfront areas of the city). Either that or we’re going to need flex gates throughout the entire MTA system.