Meet Ramtin Ray Nosrati, the Builder Behind Many of L.A.’s Megamansions 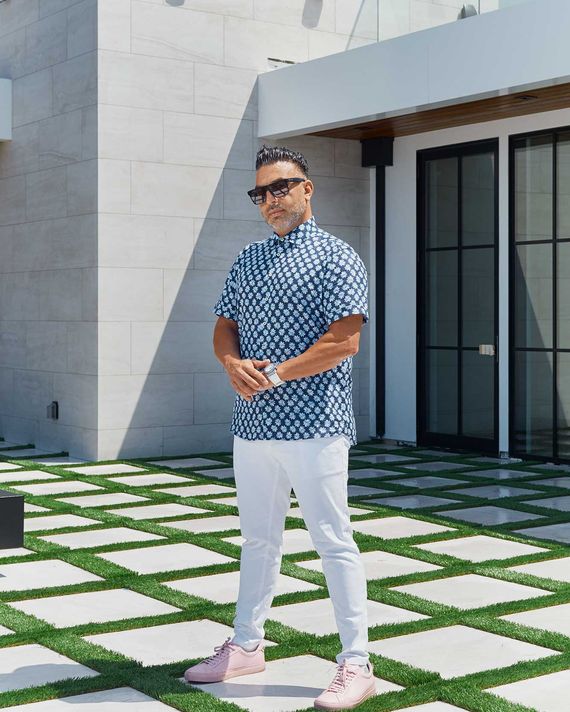 I always say, ‘The first thing you want to hear from the buyer when he opens the door is ‘Wow,?’ ” said the luxury-housing developer Ramtin Ray Nosrati as he stood at the front door of one of his latest projects: a nearly completed 12,000-square-foot six-bedroom, nine-bathroom home in the affluent Los Angeles neighborhood of Pacific Palisades. He gestured across the living room to the retractable glass wall and the balcony, which opens onto the emerald expanse of the Pacific Ocean. “If you hear that word, wow, you know you got them.”

A key part of Nosrati’s design philosophy is to have at least one wow factor in every room of a home. I had always thought wow factor was a cliché until I found the word issuing from my lips again and again as we toured the house. What else can you say when confronted with a glass-enclosed wine cellar that holds 500 bottles, or bathrooms tiled floor to ceiling in patterned stone imported from Europe, or a restaurant-grade walk-in refrigerator, or a game room that features nine huge televisions arrayed in a grid that can be used as a single, even bigger television or to display nine different sports games at a time? Wow.

Over the past decade, Nosrati has built more than 100 luxury homes across L.A. for the rich and famous. He has helped transform the city into a mecca for people looking to convert their stupendous wealth into stupendous houses — a trend he believes will only accelerate post-pandemic. “We’re getting so many clients from the East Coast right now,” he said. “Oh my God. I’m getting business managers calling left and right. The number of buyers coming in that can afford these homes has probably tripled. Everyone thought the world was coming to an end, but there’s been a lot of money made because of COVID.”

Just as the houses of the first Gilded Age represented the aspirations of the earliest millionaire class, Nosrati’s reflect the wants and needs of today’s newly flush elite. But while the Vanderbilts and the Carnegies commissioned their homes from favored architects, Nosrati and many of his fellow megamansion developers work on spec. Selling the house is as crucial as designing it, and Nosrati never stops pitching. On his Instagram account, which boasts a million followers, he presents himself as the face of both the houses and the lifestyle he sells, posting architectural renderings and home tours along with glimpses into a high-end fantasy life — the private plane to Miami, the charity galas, the courtside Lakers seats. Three and a half years ago, one of his social-media followers sent him a DM that said, “One day, I’m going to buy one of your properties. I love them.” Before this Palisades house was even completed, the follower — whom Nosrati described as a “young, single tech guy” — put $20 million in escrow.

At times, Nosrati was seized by spasms of self-aggrandizement that I came to think of as conversational wow factors. “I’ve been blessed with a vision to look at a plot of dirt and come up with really, really cool things,” he said. One thing he has pioneered is the concept of the cannabis lounge, complete with a grow operation and in-house budtenders. (“I feel like it’s going to be the next wine cellar.”) This house has no cannabis lounge, but when Nosrati opened the door of the laundry room, he revealed something that, to me, was even more impressive: two sets of state-of-the-art washers and dryers. How could a “young, single tech guy” need two washers and two dryers? He smiled slyly. “Why not? You deserve it. Even your housekeeper should be in full comfort.”

The Palisades house is the smallest of the four properties Nosrati currently has under construction, but it still dwarfs the homes across the street (the lot contained a house one-tenth the size before he tore it down). Like many L.A. mega-mansions, it is built like a fortress: a Jenga-like assemblage of white cuboids studded with rosewood inlays and black windows. In order to reach the front door, a visitor must descend about ten feet below street level via a staircase that runs parallel to the façade. “When you’re selling to celebs, CEOs, guys that are up-level, they want their privacy,” Nosrati explained.

Perhaps this makes sense for Justin Bieber, who TMZ reported in 2018 was considering a $10.9 million Brentwood house built by Nosrati. But the developer later revealed another — to my mind, more fundamental — reason for his penchant for subterranean construction: L.A.’s Baseline Mansionization Ordinance. Passed by the city council in 2008, the BMO strictly limits the size of new construction on old lots. After a wave of teardowns replaced scores of older Spanish Colonials and Craftsman bungalows with big contemporary boxes, a loose-knit “anti-mansionization” movement — made up of homeowners, conservationists, and urban-density nerds—formed to crusade against the blocked views and general degradation of neighborhood character heralded by enormous multistory single-family homes. But the BMO hasn’t held Nosrati back. He has become a specialist in hillside construction, which allows him to build “below grade,” digging into precipitous slopes and burying huge sections of a house below street level, where it doesn’t count in the overall square footage.

Nosrati, who grew up in L.A., made his money marketing cell phones and wireless services. His first development project came in 2003, when he bought some defunct chicken ranches in the suburbs east of L.A. and turned them into tract housing. After the 2008 crash, he switched from middle-class to luxury homes; he realized it was safer to bet on building for the rich, who were more resilient to crises. When he began constructing mega-mansions, he attracted the ire of residents in the neighborhoods where he built. Today, he brushes off that criticism as Luddism, a futile revolt against the inevitable future of home design that has now come to fruition. And it’s not hard to see a powerful rebuke of anti-mansionization in a house he sold earlier this year: a 50,000-square-foot compound with a full-size Kobe Bryant–themed basketball court on a floating deck that went for $44 million to the hedge-funder Jeffrey Feinberg.

We went up to the third-floor roof-deck. The blue-green Pacific was framed to the south by the white towers of downtown Santa Monica and to the north by the brown peaks of the Santa Monica Mountains. With pride, Nosrati pointed out the expansive roof-deck complete with a firepit and olive trees: a simulacrum of a backyard. “When you buy one of my projects, you don’t need to go anywhere else. You basically have everything here, right?” he said.

In the first Gilded Age, the upstart railroad robber barons, steel magnates, and oil tycoons wanted to align themselves with old-world aristocracy while advertising their new fortunes in an age when status relied less on your bloodline than on the size of your bank account. This tension spurred an architectural arms race between rich families to build ever larger and more opulent mansions inspired by French châteaus or English country homes.

The fantasy represented by this Palisades house is shorn of any reference to time or place. Instead of neoclassical odes to European royalty, Nosrati’s sleek, airy rooms of judiciously placed wow factors reminded me, above all, of a mall or an upscale hotel catering to international business travelers. (When I noted a pair of brass light fixtures, Nosrati revealed they had come from a company that specializes in hotel interiors.)

On the roof-deck, perched higher than any other building in view, Nosrati paused to reflect. “The world has changed. The value of money has changed,” he said. “Ten years ago, when we saw a $15 million house, we’d say, ‘Oh my God, a $15 million house!’ Now, it’s not as big of a deal. Just where we’re standing right now, I could tell you, within a two-mile radius, 100 homes that are worth that much.” Below, I could see the distinctive boxes of half a dozen newer megamansions sitting on the hills like alien dropships.

*This article appears in the July 5, 2021, issue of New York Magazine. Thank you for supporting our journalism. Subscribe Now!
#thevillagesmortgage #thevillagesfl #thevillagesflorida