‘I Saw My Best Friend, All Covered in Black, and Her Face Was Red With Blood’ 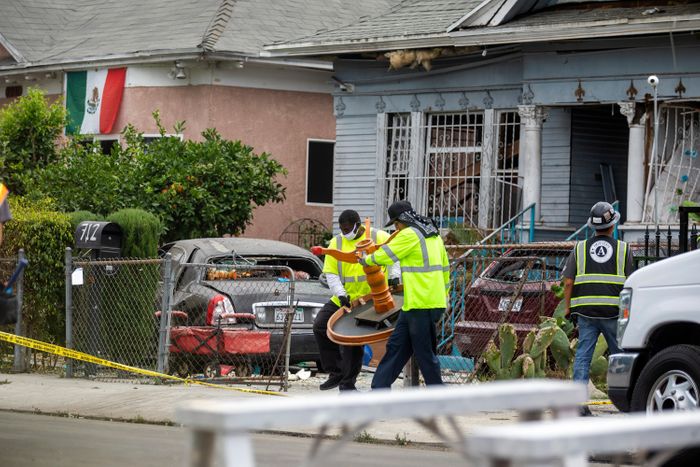 On the evening of June 30, the Los Angeles Police Department detonated confiscated fireworks in a vehicle designed to contain the blast. It went very wrong. The explosion flipped cars, shattered windows, and blew open walls, and the one-ton roof of the LAPD’s $1 million “total containment vessel” landed in a backyard two blocks away. At least 17 people were injured, some of whom were hospitalized, and two dozen households were displaced. At a press conference four days later, families said they had slept in cars and in damaged homes — still in shock, and with little help offered from the city.

This week, a group of families filed a claim against the city of L.A., and a forum allowed affected families to speak directly to LAPD officials and city councilmember Curren Price. But there are still a lot of unanswered questions, including who will be held accountable for effectively bombing a residential neighborhood and paying for the repairs. (Price has reportedly asked to convene an emergency council meeting, but the meeting has not yet been scheduled.) Martha Sánchez, a family therapist and member of the South Central Neighborhood Council who lives three blocks from the blast site, had her windows damaged and her best friend was hospitalized. Sánchez — who has been coordinating many of the relief efforts — walks through what happened that day and details the difficulty of getting her community members the help they need.

You’ve probably told the story so many times by now, but can you describe what you were doing when the explosion happened?

I’m a marriage and family therapist, doing telehealth, and I was sitting here, having a group session with over 30 families. They’re people suffering from post-traumatic stress disorder. I heard this tremendous explosion, and I was trying to figure it out. I noticed my window was coming in toward me. I put up my hand trying to hold it. I was running the meeting in Spanish, and I started screaming in Spanish: Ay, Dios mío, un terremoto! “Oh my god, there’s an earthquake.” And then I’m thinking I’m in the middle of a session, what I’m doing? and try to calm down. My clients asked me, are you okay? And I said, “Yeah, don’t worry, I’m fine.”

Afterward, I called my daughter. She looked on Citizen and told me that it was an explosion. I live on 30th Street; the incident happened on 27th. I went to social media because I have a lot of friends living in that specific area, and then I saw my friend, recording what was going on. And then she mentions someone coming out in a wheelchair who is being rushed to the hospital — and I saw my best friend, all covered in black, and her face was red with blood. And then I saw her husband, and then her aunt being rushed to the emergency room. I had the impulse to go and run and be there. But the police closed the area immediately.

Do we know yet what actually happened?

I know that the protocol is to remove anything [explosive] from residential areas and take it to the mountains. They have a specific place to do those things. Why did they decide to do that here? I heard someone saying they got tired. [On the day of the explosion] the whistleblower call was very early in the morning, at 8 a.m., and I started hearing the police activity around 1 p.m.

You knew something was going on, even before the explosion.

The thing that really struck me is that the media was there already. They were filming. At the laundromat, there were a lot of people standing, watching, and [the LAPD] are not even calling them to leave, two blocks away from the place. Kind of an immature decision.

That doesn’t line up with what the LAPD said. They said they went door to door and tried to evacuate the area.

They only told people within the block, on 27th Street, next to the truck. They told them, “We’re going to do a little explosion right here, it’s going to be just like a little noise. Just don’t open the door. Just close the door and stay inside. Nothing’s going to happen.” Stay inside? When you’re going to make an explosion?

Those are the families where you saw the front of their entire house blown open, as they were sitting there.

[They’d been] sitting there, watching what the police were doing from the window. Do you think that this glass will protect you? They were thrown as far away as from the living room to the kitchen. My God.

I remember looking at those pictures from the community residents. And there’s one that shows the fireman coming into their houses to see who was there. My friend, sitting on the floor. She was in shock. And she was just dripping blood. And she was looking to nowhere, like lost completely. Crystals everywhere. Nobody saying any words, just silence. She texted me this morning saying, “I’m still trying to heal from this. There is so much noise in my brain. I don’t know how to handle it. I don’t feel good. My family doesn’t feel good. I can’t even comprehend what really happened to us.” There’s so many kids having the same experience. At the forum, I remember asking these ladies that were making this horrible sound with their horns, trying to shut down the voices of the community members that were asking for solutions —

Wait, what? Who was doing that, and why?

They were coming from a specific group that attends the community meetings with police officers. They have signs saying WE LOVE POLICE OFFICERS, WE SUPPORT POLICE ACTIONS, and things like that. And they broke out these horns that they use when you watch soccer games. I had to stop them, and I asked them, “Do you think that your noise is going to help the families impacted? To feel safe? Look who’s sitting next to you — the children are cowering in, like in fetal positions, because they think that the noise that you’re making is going to bring more pain to them.”

Your councilmember, Curren Price, said Monday he lives 10 blocks from the explosion and felt the shock wave, but he also said that he had no idea this operation was happening.

That’s a fallacy. If you are a representative in the political arena, and there is police activity happening, you always get the information firsthand. Later on, I’m going to ask for accountability, for reports — it could take years. But I don’t think that this is the more important thing. I want to put them to work so people can come back to their homes and have the resources they need. Meanwhile, the investigation takes place. Because if you don’t put people first, you’re signing up for failure.

The scene still looks so devastated. How are people doing today?

Let me give you an example. One of the families was told that there is this community group willing to cover their broken windows [with plywood]. A lot of families were telling us that they were placed in hotels that are not really nice — really scary places to be with their children. So if they are traumatized by whatever happened to them, and they find these people saying “I’m going to put the plywood in your windows so you can come back,” you’re going to say yes. But they’re going to remove the damage — the evidence — and then what is going to be the claim? When you have a crime scene, you don’t touch anything—you walk with the expert, you take pictures, you make an assessment of the losses and they keep a record.

They’ve said the numbers of families displaced and financially impacted, but you also obviously have damage. So are we talking about hundreds of people who have had their lives disrupted?

I can’t even tell you the feelings of the others. But they were really injured. Emotionally, economically. They don’t have any other place to go. And these are families that were behind already with their rents. What if the property owner decided to sell the property because it’s too damaged, or he doesn’t want to deal with the bureaucracy and all this paperwork, he decided to sell it to one of those speculators coming down?

So you have seen people making offers.

They were here before the incident. I always receive at least two or three phone calls per day. We receive the invitations through the mail. We get these pamphlets, CASH FOR KEYS.

The councilmember said he’s going to protect this neighborhood from gentrification and speculative development.

I don’t see that happening with the steps being taken. Because if he’s truly about that, he wouldn’t allow a lot of projects coming near to us. He’s building affordable units in some specific places, but still, the people inside a community, they don’t qualify. They bring people from outside to live here. So we see this as a way to divide and conquer us even more.

What are you hoping to see happen in the neighborhood in the next few months?

My biggest hope is to get authentic support for not just two blocks of families impacted, but having a bigger radius, like three miles away. That’s why so many people came to the forum to speak out. It can be fireworks, it can be removing resources, it can be closing down a library, it can be a church — anything like this really impacts communities.

The next step is, I want to create a space for families so we can assist them, because they have the forms to file claims — but nobody’s going to tell them what it means to check this box. I want to find space away from the city so they can feel confident and bring some lawyers to file those claims without involving the council district. They can ask questions in a confidential setting. Because if I wait for the city — oh, no, I learned my lesson years ago.