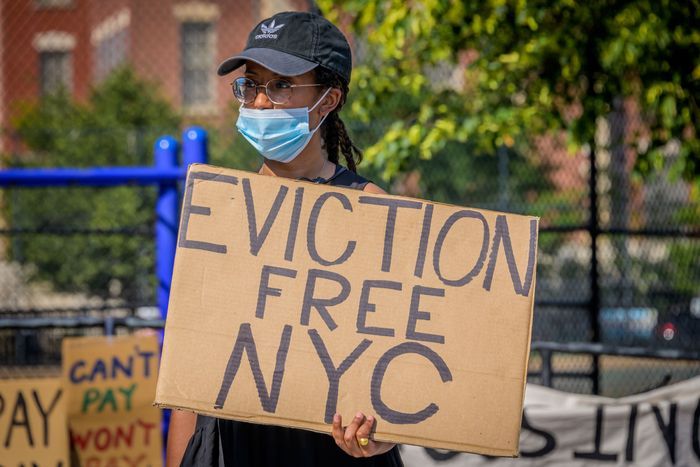 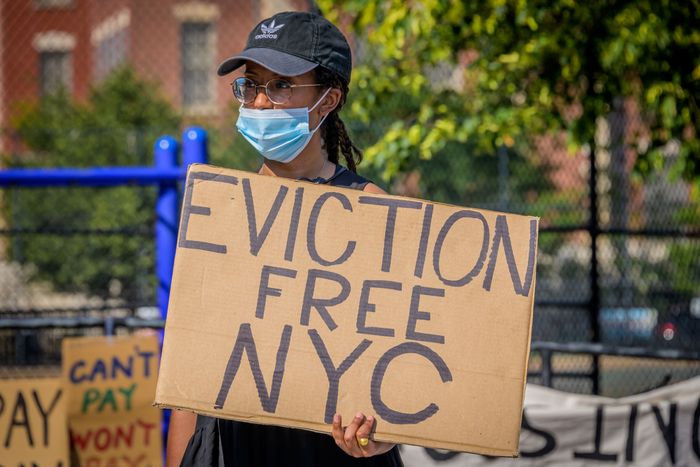 In a pair of rulings last month, the U.S. Supreme Court all but gutted New York State’s moratorium on evictions and overturned the CDC ban. Despite the spike in COVID-19 cases across the country and unemployment benefits ending in a few days, the true nightmare for the six conservative justices was one in which the CDC could “mandate free grocery delivery to the homes of the sick or vulnerable” or “require manufacturers to provide free computers to enable people to work from home,” as they wrote in their decision. At the opposite end of the political spectrum, Governor Kathy Hochul pushed for a sweeping moratorium on evictions and foreclosures, passed Wednesday, that will keep New Yorkers in their homes until January 15. “We are not going to allow people who, through no fault of their own, lost income, are not able to pay, and are facing eviction,” she said at a Tuesday press conference. The move is yet another that distances Hochul from her predecessor, who last year dribbled out piecemeal moratorium extensions.

The new moratorium, an updated version of the state’s previous pause on evictions, was passed by the Legislature in a rare special session Hochul had called. A key change to the law creates a path for landlords to challenge a tenant’s claim to financial hardship in court. A judge can now rule on whether a tenant qualifies, weighing factors such as loss of income or increase in expenses. If the judge sides with the landlord, the eviction case can move forward; otherwise, it is postponed until January. The change specifically addresses the Supreme Court’s objection to New York’s earlier moratorium not having a mechanism for landlords to contest their tenants’ claims. “Basically, we’re giving people their day in court,” State Senator Brian Kavanagh, the chair of the senate’s housing committee, said Wednesday during debate on the bill. And to ensure that tenants being asked to return to court have lawyers, the Legislature also approved a new $25 million legal-services fund for those facing eviction in a separate bill.

Crucially, the extended moratorium gives the state another shot at finally distributing the more than $2 billion in rent relief that has mostly been sitting stagnant for months. As of August 23, the program has doled out only $203 million to landlords — just 7 percent of the available funds. The state has approved another $605 million in relief but has yet to push that money out. The new moratorium also allows residents of the seven counties that chose to launch their own versions of rent relief to apply to the state’s if their local program runs out of money. Lawmakers gave the aid a boost on Wednesday by adding another $250,000 for those specific renters. Once Hochul signs the bill into law, the extended moratorium will take effect.

To Hochul’s credit, she made it clear from the start that speeding up rent relief and preventing evictions were a top priority. On her first day in office, she ordered the state to spend an additional $1 million on marketing and outreach to raise awareness of the rent-relief program (just 176,000 households have applied out of the more than 800,000 New York tenants who are behind on rent), and a week later Hochul said she would have state workers take a “SWAT-team approach” of going door-to-door, “like the people who are involved in the Census,” to tell residents about the program.

Cea Weaver, a tenant activist with Housing Justice for All, called the new moratorium a big win for New York renters. “This is the best-case scenario for tenants. It’s going to save people from losing their homes. It’s going to protect people’s health from the Delta variant,” she said. But the urgency with which the Legislature acted left little time for lawmakers to closely review the new legislation. “I’m really concerned about the lack of transparency, the ability to really delve into this bill and understand the details,” said State Senator Pamela Helming, who represents upstate counties including Cayuga, Monroe, and Ontario. She received a draft of the legislation only on Wednesday morning. Meanwhile, landlord groups are ready to challenge the new state moratorium and are especially emboldened following their two Supreme Court victories. Joseph Strasburg, the president of the Rent Stabilization Association, which was among the groups that won the recent Court ruling against the eviction moratorium, and a cadre of landlords already plan to strike back. “Make no mistake, we will challenge any attempt by lawmakers to legislate an eviction moratorium,” Strasburg said.