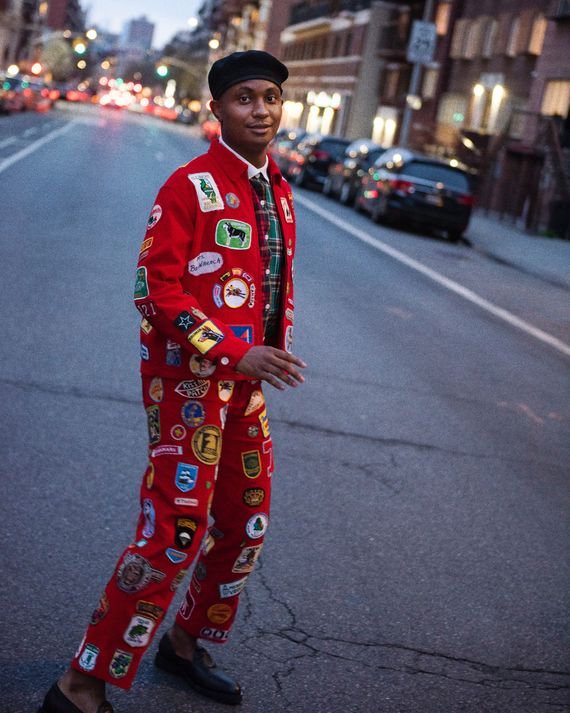 ‘Holy shit we’re in the lead,” tweeted Chi Ossé, a City Council candidate for the 36th District, on the evening of June 22. He was responding to the early returns from the Democratic primary, which showed that voters from his swath of Crown Heights and Bedford-Stuyvesant had placed him ahead of four opponents. A few days later, it looked even more likely that the first-time candidate would win. “I’m still like, ‘What happened?’” Ossé told Curbed on that Friday afternoon. He looked relaxed, dressed in shorts and sneakers, perched on a concrete ledge in a Crown Heights park. “I felt confident about our race; I felt like we worked really hard,” he said. “But everyone was telling us we were going to lose.”

The 23-year-old nightlife promoter turned Black Lives Matter protest organizer has spent the past year stumping across Brooklyn and Instagram with a bullhorn, a beret, and a clenched fist as his campaign logo. Still, political office is a leap for Ossé, a self-described queer college dropout who did not have the support of the Brooklyn Democratic Party establishment, labor unions, or business leaders. They backed his closest opponent in the race, Henry Butler, a retired subway conductor and party official whose platform rested on familiar Democratic Party standbys: unionized jobs, affordable housing, quality health care, and more investment in public schools. Like Butler, Ossé prioritized housing, schools, and sanitation; unlike his opponent, he promised to cut the NYPD budget and refused real-estate donations. And it seems to have worked; after weeks of vote-counting chaos at the top of the ballot, Ossé was ahead by 14 points, and Butler conceded on July 7.

Since the election, Ossé has guest DJ-ed at a block-party fundraiser for a struggling record store in his district; met with the state’s most senior Democrat, Senator Chuck Schumer; and attended the Pyer Moss couture debut at the Hudson Valley mansion where Black cosmetics entrepreneur Madam C.J. Walker used to host leaders of the Harlem Renaissance. He also appears in Spike Lee’s new HBO documentary series, NYC Epicenters: 9/11-2021½, to talk about last year’s Black Lives Matter protests. Traveling between these different circles, Ossé seems to project that he is a grassroots guy, a Black cultural agent, and a rising political force all at once. With no Republican challenger in the general election, he will likely join the City Council at a historic moment, one that has been opened up by term limits to a younger, more diverse field of candidates. More than half of the legislative body’s 51 seats will go to newcomers, among them progressives like Ossé.

Before the pandemic, Ossé was hosting parties at Ian Schrager’s PUBLIC hotel rooftop and at Paul Sevigny’s super-exclusive Baby Grand lounge. In between, he took odd jobs promoting fashion and retail brands. When George Floyd was killed by police in May 2020, “I was filled with anger and sadness and pain, like many Black and brown people in this country, and I took to the streets,” he said. Ossé and a group of fellow marchers formed Warriors in the Garden, a Brooklyn-based collective that organized daily demonstrations against police brutality. Two weeks into the protests, one of his aunts told him that marching was not enough. “And she threw out the idea, ‘Why don’t you run for office?’” Ossé said.

He had never considered it before. “But it felt right in that moment,” he said. He decided that if he wanted to change the city’s funding priorities, like cutting the city’s police budget, he would have to be on the inside.

Ossé’s new friends in the Black Lives Matter movement were willing to help him run, even though “none of us had worked on a political campaign before,” he admitted. But he had some advantages of his own. He was a third-generation Brooklynite who had grown up in Crown Heights since age 10. And he had been raised in a well-connected household — Ossé’s father was Reggie Ossé, known to many as Combat Jack, a former entertainment lawyer who turned a legal internship at Def Jam Records into a practice representing hip-hop heavyweights such as Jay-Z and Damon Dash. Ossé’s African American and Chinese mother, Akim Vann, is co-founder of the popular Bakery on Bergen in Prospect Heights; her father was Grammy Award–winning record producer Teddy Vann. Ossé attended Friends Seminary, the elite private high school in Manhattan.

Along with his new activist friends, these are the people who showed up when he began his campaign. A fellow Friends graduate, Martin Rather, grandson of newsman Dan Rather, became one of his campaign-finance consultants. A longtime family friend, Tai Allen, brought his past experience working on another Brooklynite’s campaign for State Assembly to his role senior adviser to Ossé. And from his nightlife circle, he recruited a fellow party host, Brandon Tan, who works for him as a freelance stylist.

But he distances himself from traditional elite milieus — “Friends Seminary is definitely not like a Horace Mann, definitely not like a Dalton,” he said. And as recently as 2017, when his father died, a family friend organized a GoFundMe drive with the goal of raising $250,000 “to assist in some of the burden now facing his family and four school-aged children.” The drive remained open until July of this year and raised just $13,576.

Ossé believes that his advantage comes from his cultural ties, his upbringing in a multiracial household, his long history with Crown Heights, and his exposure to the music industry. The campaign workers he assembled from the ranks of Black Lives Matter protesters are similarly culturally attuned — young people working in mass media, graphic design, the arts, and education who met each other through antiracist activism and learned political campaigning working on his race. Campaign manager Paul Spring is a 32-year-old musician from Minnesota with no past political experience who met Ossé at street protests in Brooklyn, and was impressed by his leadership persona. “We joked that it’s like the X-Men, and Chi is definitely our Professor X,” Spring said.

As a spring and summer of protests gave way to a fall and winter of campaigning, Ossé immersed himself in municipal policy and knocked on thousands of doors. He listened to residents talk about everything from affordable rent to pest control. “Let’s talk about rats,” read one Ossé campaign flyer. “We treated him like an incumbent,” Allen said, explaining that the block-level service work that Ossé did, from neighborhood park cleanups to COVID vaccination drives, was something he anticipated doing as a sitting councilmember.

The campaign picked up momentum early in the year, propelled by a mix of constituent outreach, street-protest energy, and occasional glamour. Endorsements from Ilana Glazer of Broad City and rapper Killer Mike of Run the Jewels complemented the less splashy but weighty nods from the Working Families Party, comptroller candidate Brad Lander, and, in June, the Courage to Change political action committee founded by Alexandria Ocasio-Cortez.

The campaign was not flawless. Ossé, styling himself as the diligent learner with the detailed platform, fumbled a debate question in May about redevelopment and the role that councilmembers hold in the process. He out-raised his opponents but was initially denied matching funds. He took almost a week to apologize for offensive tweets from his past that surfaced in June.

But his preparation also helped him stand out. “He was so rehearsed that at first I was a little bit put off,” said Mark Winston Griffith, Brooklyn Movement Center’s executive director who had interviewed Ossé for a Working Families Party candidate survey. But he was soon impressed by the candidate’s exhaustive knowledge: “He could talk more deeply about the issues than other candidates. He was more prepared. And he was able to carve out for himself a progressive niche or voice that the others could not.”

Griffith also speculated that Ossé won because of central Brooklyn’s shifting political allegiances. In 2020, the same neighborhoods that voted for Ossé sent two political newcomers endorsed by the Democratic Socialists for America to the state legislature: Senator Jabari Brisport and Assemblymember Phara Souffrant Forrest. “So you had not only the rise of the gentrified woke voter, you also had a fracturing of the old Democratic regular electorate,” Griffith said. “The electorate is now younger, whiter, more affluent in some pockets, and Chi Ossé stepped into that position.”

Even without a challenger in November, Ossée said he plans to spend part of the general-election season delivering food to the needy and introducing himself to more voters. He envisions his first tasks as a councilmember will be to push for two projects in Bed-Stuy that have been stalled: a garage for city sanitation trucks, which would shorten the neighborhood’s wait for trash pickup; and a renovated community recreation center in Herbert Von King Park.

Ossé is aware that many are watching him, wondering what he will actually accomplish. “I would be an idiot to think this would not be a hard job, and that’s why I’m taking it very seriously,” he said. But his opponents in the race still may not be prepared to take him seriously. As Reverend Robert A. Waterman of Antioch Baptist Church told Curbed, Ossé should be careful not to succumb to “a syndrome of superstardom, not service.” But listening to Ossé talk about his campaign so far, it’s clear that he doesn’t plan to be a conventional public figure. “The whole thing has been a party,” he said with a laugh. “The ups, the downs. The drunk girl crying in the bathroom. All of it.”

One Great Story: A Nightly Newsletter for the Best of New York

The one story you shouldn’t miss today, selected by New York’s editors.
By submitting your email, you agree to our Terms and Privacy Notice and to receive email correspondence from us.
#thevillagesmortgage #thevillagesfl #thevillagesflorida